Since 2002, the general purpose of the Storm Water Management Ordinance is to accommodate anticipated community development and land use practices, while controlling the quality and quantity of storm water runoff, and properly managing and protecting ground water resources as well as the physical habitat of the Kinnickinnic River and its tributaries, and set forth storm water management and erosion control standards which apply to all land development and land disturbing activities. 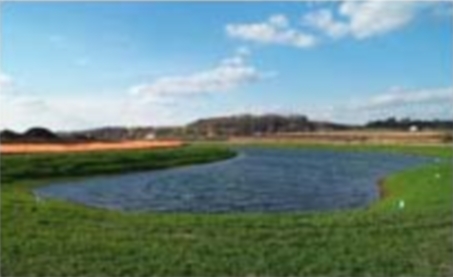 Since 1982, City of River Falls ordinances have regulated rainfall events up to the 6-inch, 100-year, 24-hour design storm, which have a 1% probability of happening in a given year. Our current ordinance requires runoff from 1, 2, 10, and 100-year events to be captured and controlled such that the rate of storm water discharge does not exceed predevelopment conditions.

Published information by Schueler, Pitt, and other national storm water experts indicate that the first flush of storm water runoff carries the pollutants from impervious surfaces typical of urban areas.

Studies in the Midwestern United States have shown that 90% of the average annual rainfall depth is produced from rains equal to or less than about 1 inch (Roesner, L., et al, 1991; Pitt, R., 1991). Practices that encourage infiltration of storm water from these numerous small rainfall events may also effectively improve water quality.

Due to its proximity along the spring fed Kinnickinnic River, the City of River Falls has chosen to adopt an even higher threshold in its Storm Water Ordinance. It requires infiltration of additional runoff generated by a 1.5-inch event. On top of that, standards adopted under the ordinance require that a safety factor of two be used in designing infiltration areas. The result is that infiltration basins, at the time of acceptance by the city, will be able to infiltrate twice the additional runoff generated by a 1.5 inch event.

We have created pre-approved designs for small sites. These designs may be used on sites adding between 1000 and 3000 square feet of impervious and disturbing less than 6000sf. To utilize these designs, fill out the Small Site Storm Water Design Application and submit it to the engineering department with your Storm Water Management Permit Application.